We are proud of the work we did with Seramount.

As one of the more mature organizations in an increasingly competitive field, Seramount needed a multidisciplinary business, creative, and technology partner to help position them as a leader in the constantly changing diversity, equity, and inclusion space.

Seramount is the result of a consolidation of three businesses: Diversity Best Practices, [email protected], and the events and research divisions of Working Mother Media. Since they also focus on research and consulting, they were looking for an improved membership experience with their gated content and membership portal. They also needed an improved search functionality and tagging system as well as improved ways to track site metrics.

Seramount engaged Last Call Media to deliver a more focused and compelling narrative to tie the products, tools, and services from those three disparate lines of business together into an end-to-end solution for purpose-driven leaders and teams at Fortune 1000 organizations.

Our work began with an assessment of the three lines of business through interviews with Seramount leadership and employees who support the delivery of Seramount’s products and services. We then completed a series of structured customer interviews to learn more about how Seramount meets the needs of its customers. We then used that data to build a product roadmap to gain alignment on the customer opportunity and product vision with Seramount leadership.

We approached building the new Seramount iteratively. Once we had a working prototype, we met with customers again to show them work in progress, to test our vision and to refine it based on their feedback.

Some of the challenges addressed involved building an easy-to-use online portal for Seramount customers and employees to access and update gated content only available with a Seramount membership. We solved one of the major customer challenges by eliminating the need to use passwords to access gated content. On the new Seramount, customers enter their work email and if their employer is a customer, they get an email inviting them to login to Seramount. By requiring employees to use their own accounts, Seramount now has additional data to demonstrate the value of their membership to existing customers.

The final deliverable is a B2B online learning and development platform built on WordPress.

Success meant they needed new automation for their process.

The service needed to enable customers to create an account, provide necessary marketing metadata for DeepIS’ marketing team, and guide customers through the sales process from subscription estimation to subscription purchase, renewal, and upgrade. Customers also needed to access content related to their service, DeepSQL, online in real time.

The custom subscription calculator in the AngularJS app pulled in data in real time from Zuora, using Zuora’s APIs, so users were presented with the most up-to-date pricing. Once the purchasing workflow was complete, the user’s card was charged and they received an email with their receipt and license key moments later, all without needing to speak to a DeepIS representative.

Further, with event-triggered email campaigns using HubSpot, DeepIS was able to strategically nurture customers on the trial or free plan to upgrade to a paid plan. Data from SalesForce, Drupal, and Zuora was fed to HubSpot email campaigns, increasing the likelihood of a user purchasing a paid subscription. The emails had a unique URL generated by SalesForce, and the user could provide their credit card information and upgrade their subscription with a few clicks.

The Advancement Department of Amherst College needed an updated brochure to support their efforts of encouraging donations to the Annual Fund’s 25th Anniversary Program campaign. Last Call Media was excited to build upon our technical experience migrating Amherst to Drupal and in building the Title IX iOS App with a project that could showcase our marketing strategy and design talents.

The twenty-fifth anniversary year is an important one for advancement activities. Alumni have generally attained career and financial stability by this time, and it is an important moment in which to encourage a lifetime habit of giving to Amherst College. Amherst needed an accessible and compelling visual that would explain a complicated funding program. Working within existing guidelines and style templates, we worked with the Annual Fund to build a tri-fold brochure that plainly communicated the benefits and procedures of giving during the five years leading up to and including an alumnus’ twenty-fifth anniversary reunion year. 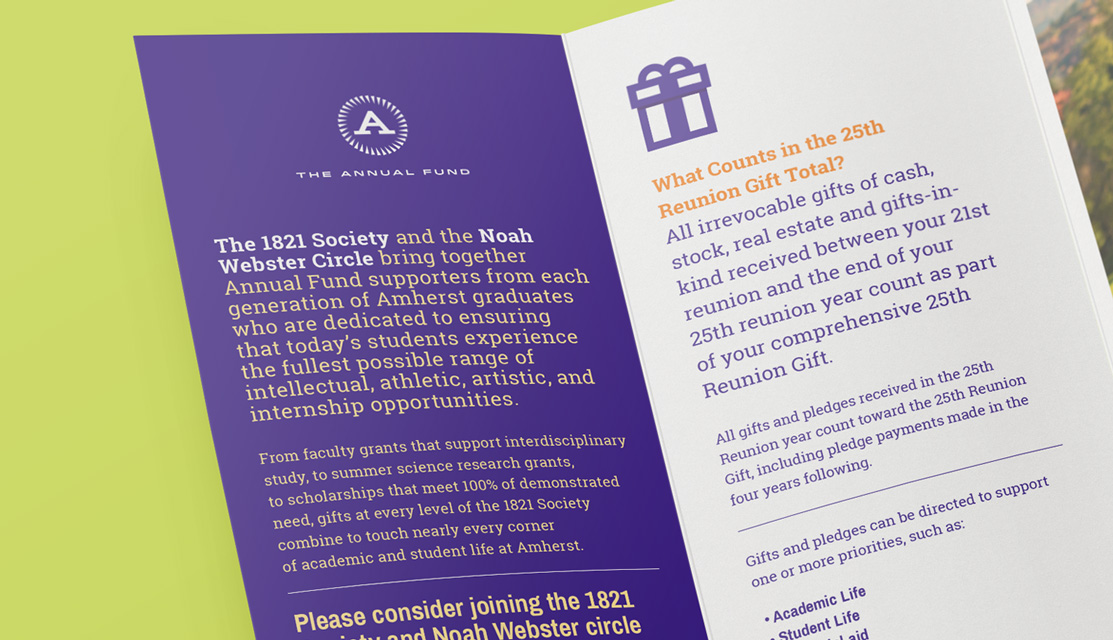 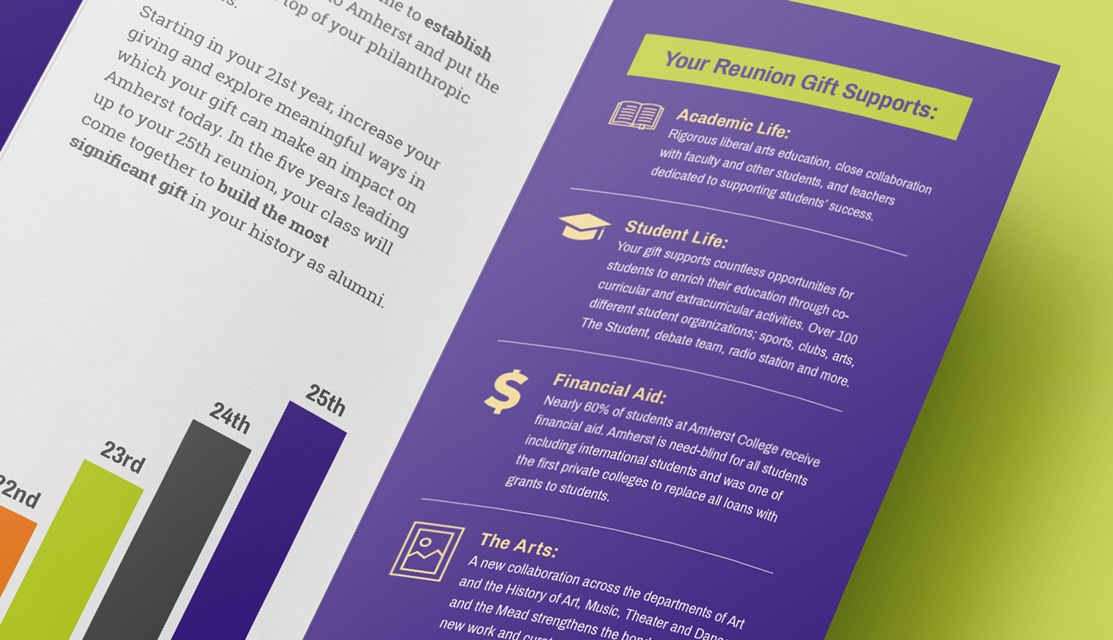 Staff reported that the leave-behind brochure was incredibly helpful for both their volunteers and donors, and twenty-fifth anniversary giving broke fundraising targets and records in 2015 and 2016.

Close story
Get in touch
Expand
University of Southern Mississippi

We already knew that USM.edu was an aging Drupal 6 site that was slow and difficult to update under the hood, but furthermore, site admins had little to no visibility into the performance of the platform, coupled with limited functionality and almost no reporting tools. Beyond Drupal 6 quickly becoming end-of-life from a development standpoint, USM agreed that from the marketing ROI perspective, it was time to move to Drupal 8.

Due to Last Call Media’s long-standing working relationship with the University of Southern Mississippi, we were able to break ground quickly. The marketing and IT teams on USM and LCM agreed to work iteratively by first focusing efforts on launching a pilot site on Drupal 8 and prioritizing additional departments and colleges after the initial launch. This allowed the LCM team to formulate a focused yet creative digital strategy that would get into the hands of the USM audiences faster and allow for user feedback to inform future, more complex, development and content needs. Additionally, USM was able to communicate directly with the Acquia Certified Drupal 8 developers and architecture consultants at LCM, to provide expertise on best practices and development techniques. This direct line of communication with our certified team gave USM confidence in their ability to develop the new Drupal 8 platform alongside us. Some Acquia technologies we used on USM.edu are Acquia Cloud, Acquia Cloud Shield, Acquia Cloud Edge, Acquia Search, and Acquia Ready. The Acquia platform allowed USM to maintain a homogenous interface to their new Drupal 8 product and the workflow tools have allowed internal and external developers to collaborate in building new features and has made the quality assurance and release process consistent and seamless.

Since the relaunch of USM.edu on Drupal 8, feedback on campus has been overwhelmingly positive. The community was engaged and involved along the way, so it was a huge moment on campus when the site went live.

There have even been some tangible technical results that the school benefited from almost immediately. One of the key results the site achieved was a sub-second page load for the homepage, despite using a video in the hero region. To accomplish this, we worked with the USM development team to obsessively reduce and minify front end assets, prefer CSS over images for presentational styling, and to lazy-load large assets not required for the initial pageview. Throughout the process, we tested using a front-end performance benchmarking tool (Phantomas) to keep us on track and efficient.

Though the LCM and USM teams were optimistic and bases were seemingly covered, the immediate success or failure of the site, however, rested on its ability to stay up during the initial launch. The University expected up to 85,000 visitors in a day due to our marketing efforts. To meet this goal, we developed and executed a load testing plan, giving the University the confidence and success they expected on launch day. Since its launch, the new USM.edu has been a huge victory and the University continues to see benefits from more in-depth reporting via Acquia, to site admin efficiency, all on a stable and supported Drupal 8 platform.

NERD has used the Lil NERDy character for a long time, but we felt the character could use a little refresh for the 2020 NERD Summit. We wanted to bring a warmer more illustrative tone to Lil NERDy, and give the event a unique theme that helped to express the values and mission of NERD. 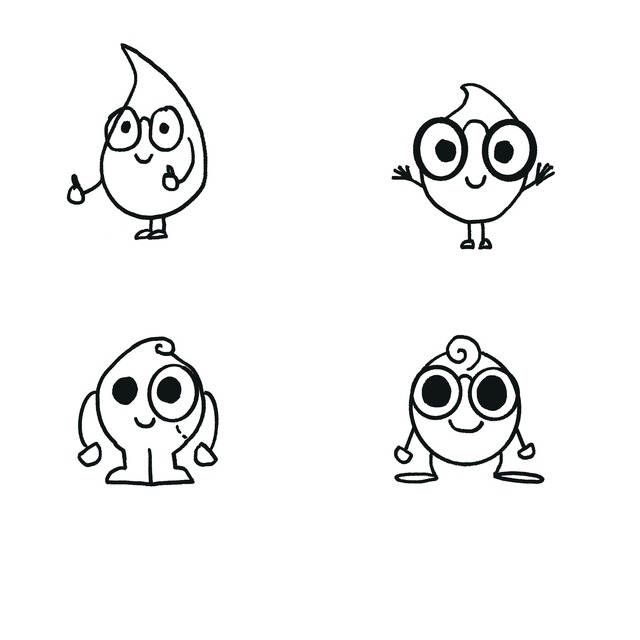 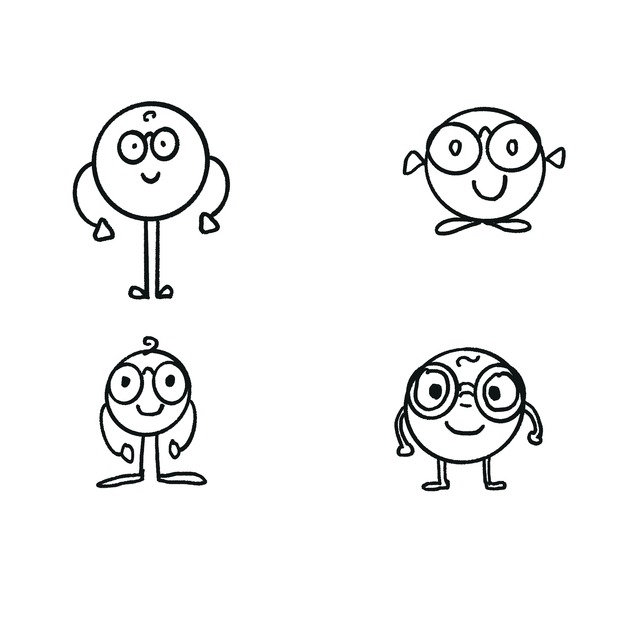 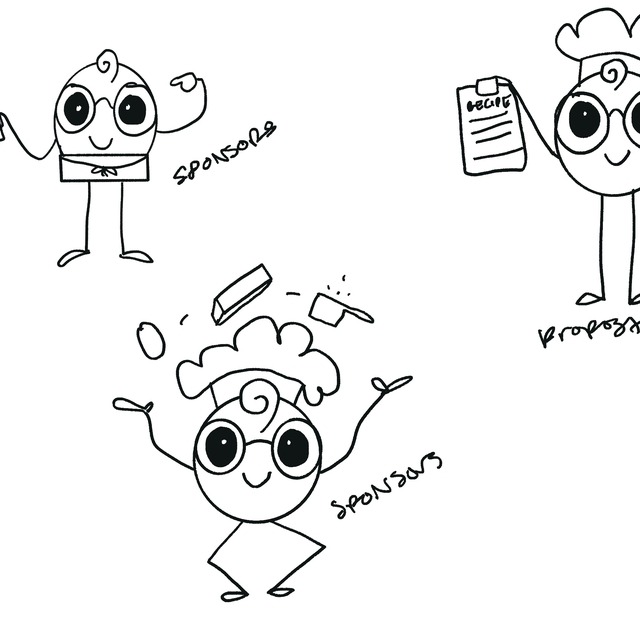 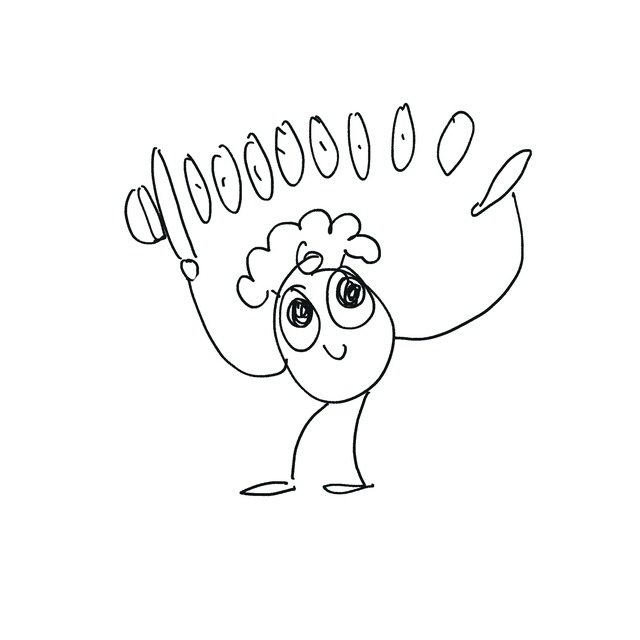 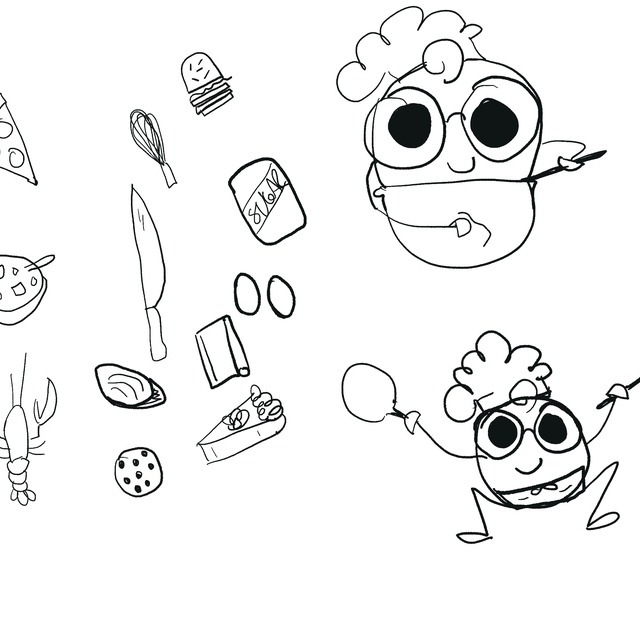 Bringing a refreshed NERDy to life 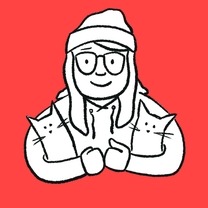 We brainstormed several ideas but landed on a theme around cooking and food. This theme is rich with metaphors about working together, each ingredient adding to the final result, and a robust menu of content for attendees. From there we started sketching layouts. It turned out that Lil NERDy looked really cute in a chef’s hat! 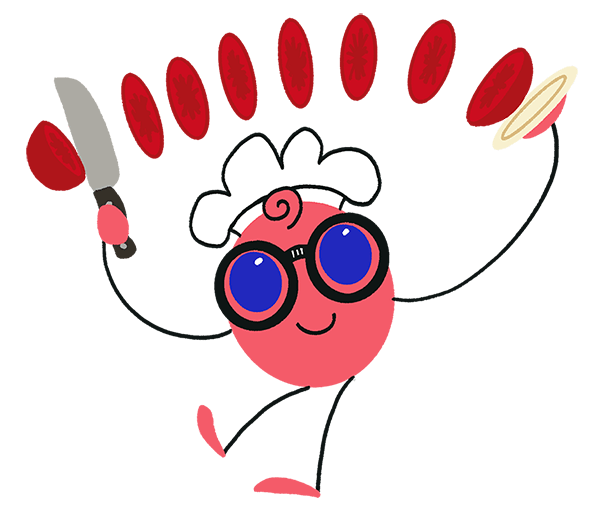 We tried to produce images that spoke to the metaphorical meanings of the theme. NERDys sharing food, cooking together, or adding lots of ingredients. We also created some custom images, such as the call for volunteers, and hackathon email images. 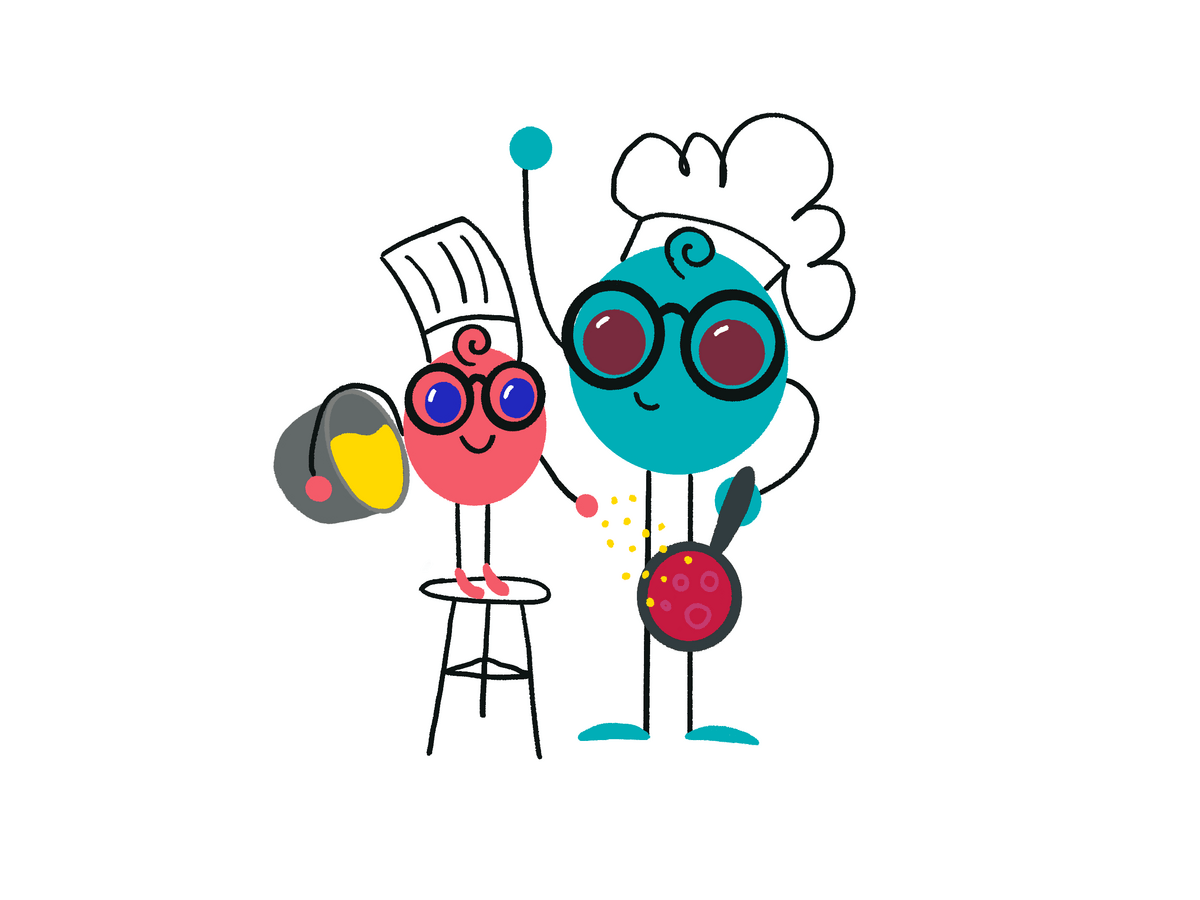 Remixing an existing character was a challenge, because it had to remain true to the feeling of the mascot, but also be refreshed enough that it was clear 2020 had a unique look and theme. We had to establish rules, such as the eyes always being darker than the body color, to make sure they looked cheerful and lighthearted, and hands and feet being simple shapes. 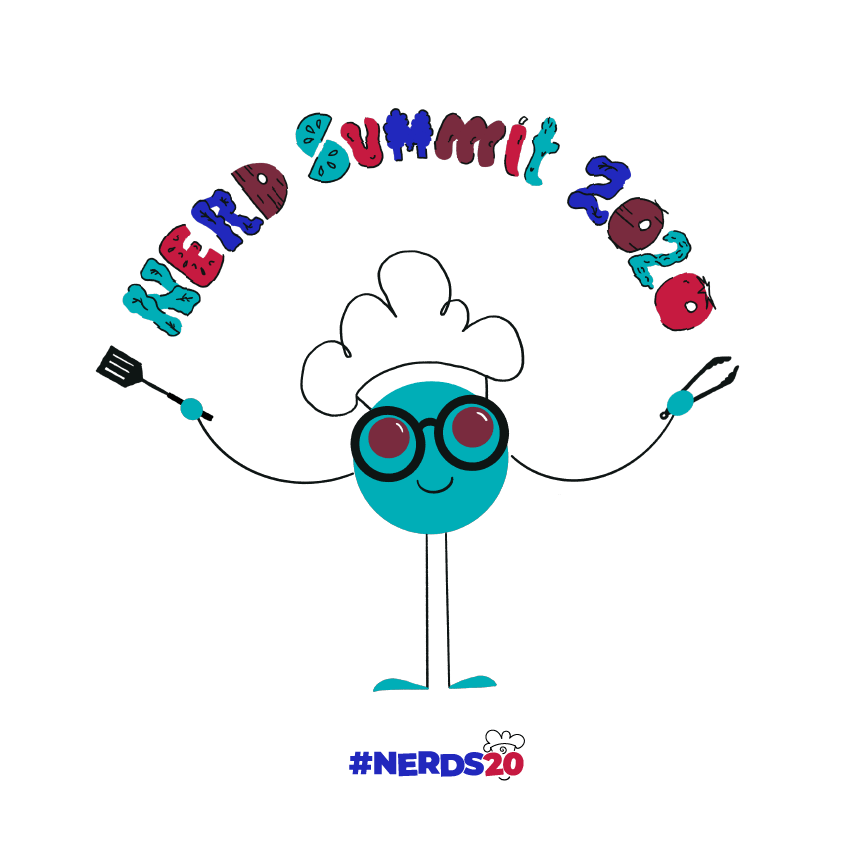 Another element we brought to this theme was patterned backgrounds. We illustrated foods and cooking tools, and added them behind event collateral, to add another dimension to the illustrations when used in emails and on social media. This added depth to the imagery, and consistency to event collateral. 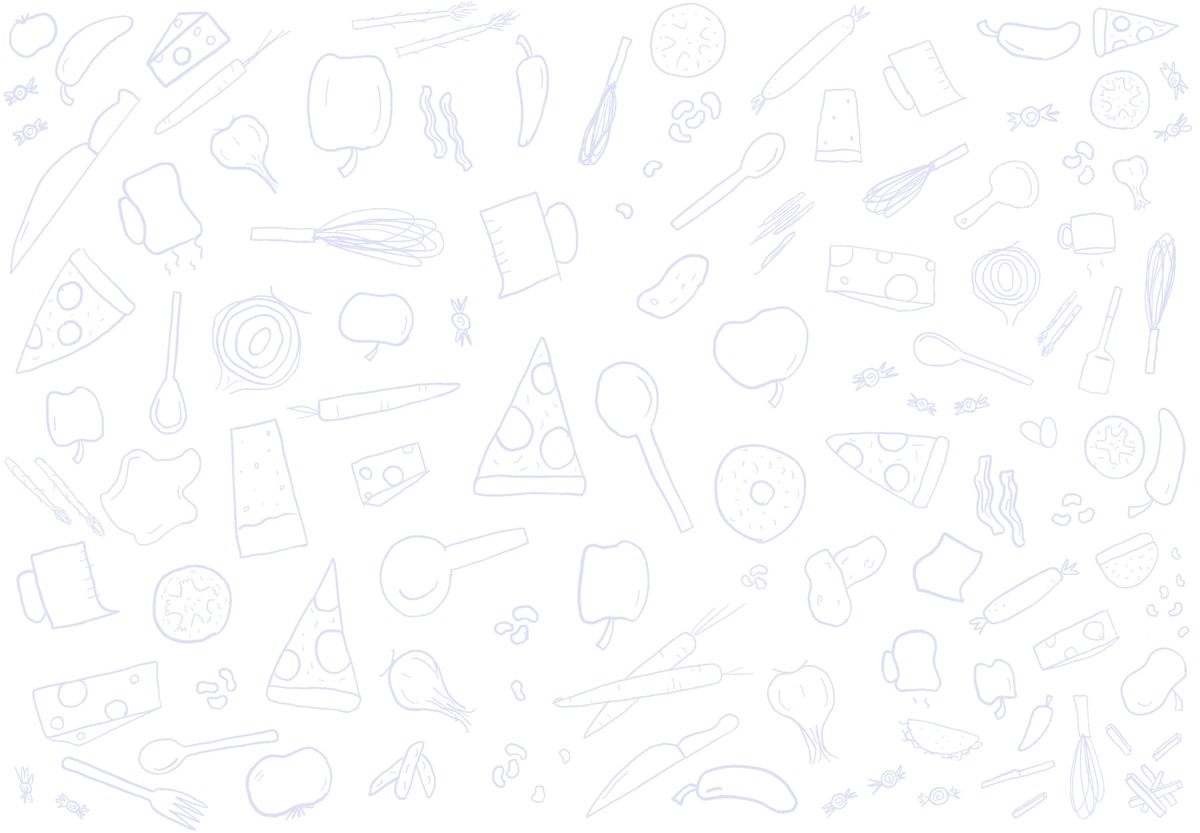 We were able to create a library of Lil NERDys, supplemented by two patterns, that tied into the theme and were informative in the event marketing materials and collateral. NERD Summit had to make a quick pivot due to Covid-19, and was a remote event. We were still able to utilize Lil NERDy across many digital assets and bring some warmth to a then-unfamiliar new event type. 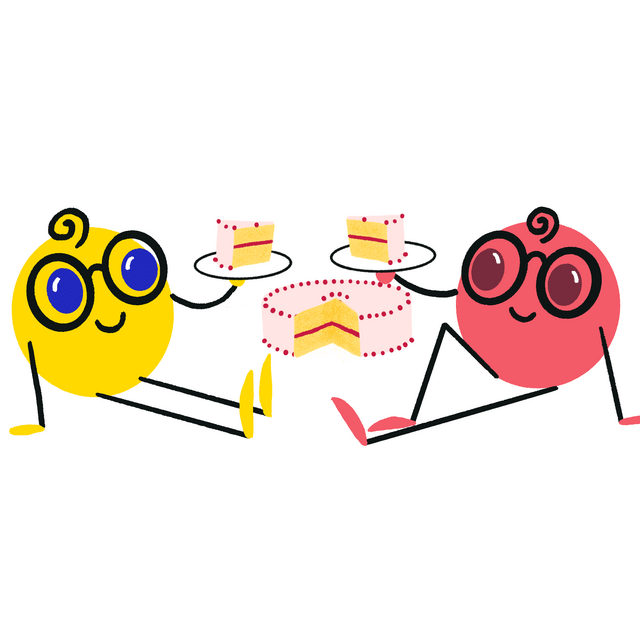 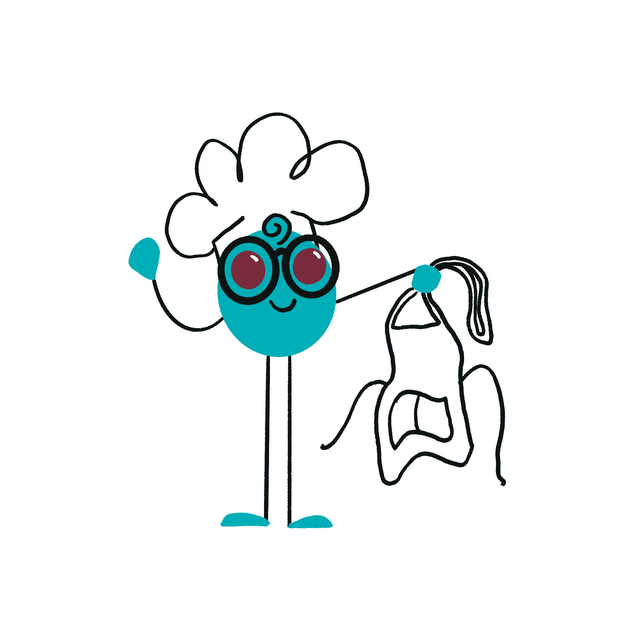 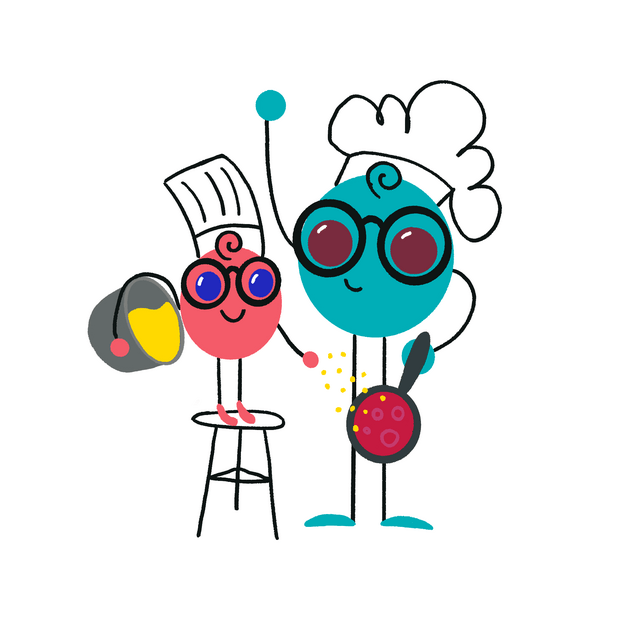 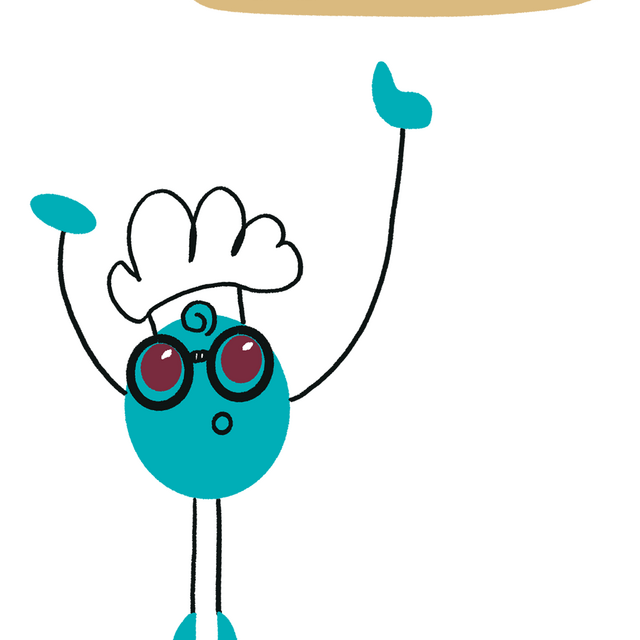 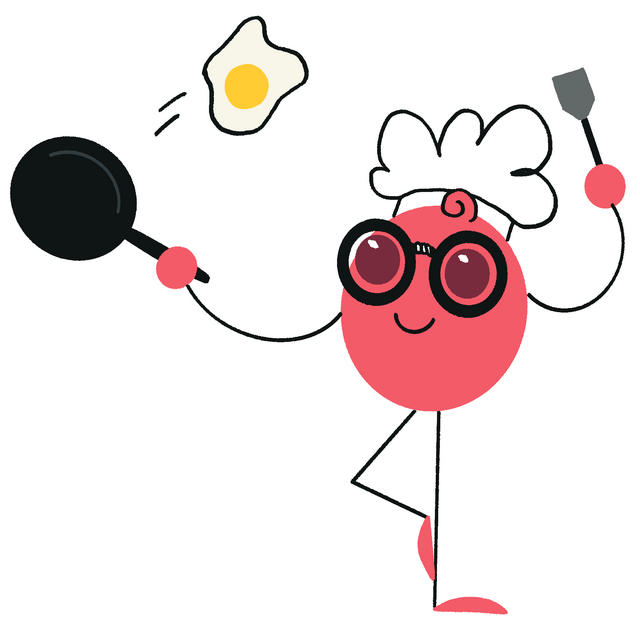 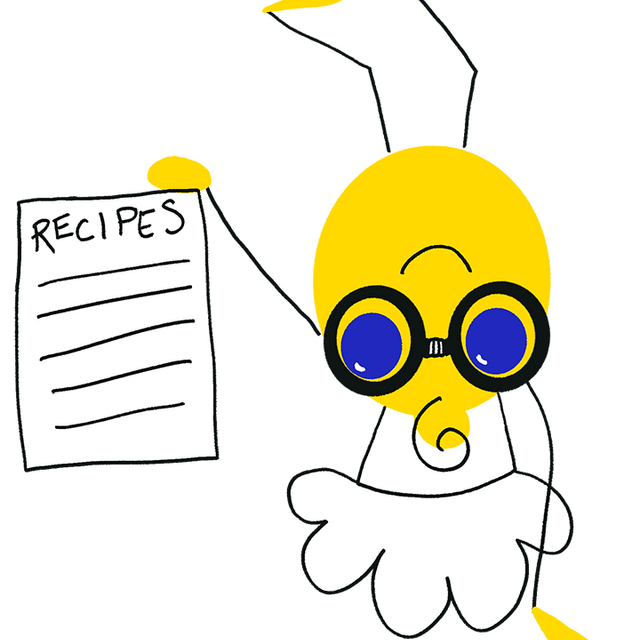 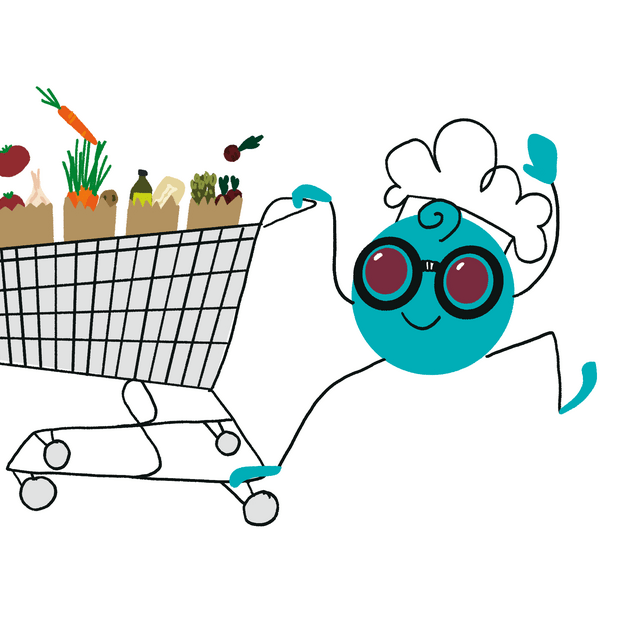 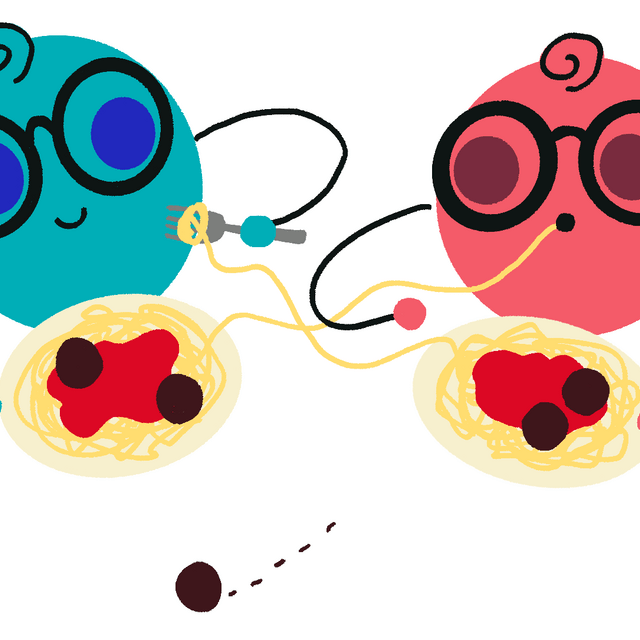 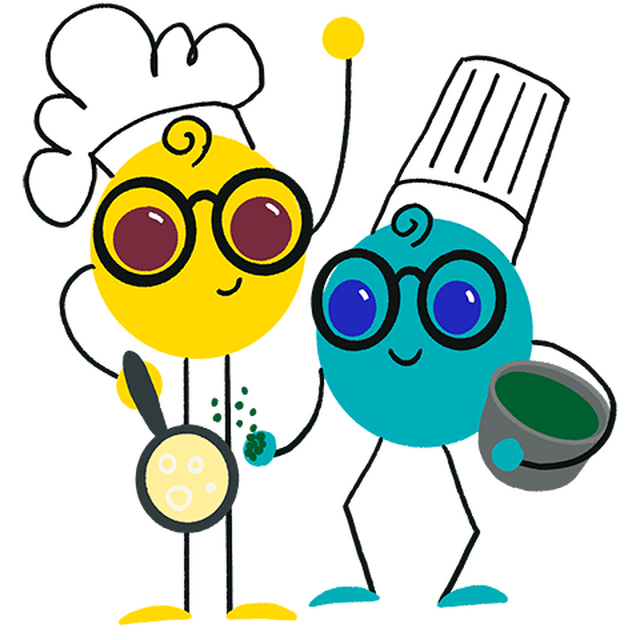